When did you start curating? Tell us something about your educational background?

When I started working in the field of exhibition making in 1997 for document X in Kassel, there was hardly any curatorial education. I studied literature, film and theater and did my masters on experimental theater in Germany in the 1960s, so my curatorial knowledge comes exclusively from learning by doing and reading and discussing my concerns with peers. I worked for KW Institute for Contemporary Art between 1998 and 2005, starting from being an assistant to the artistic director and co-curated the controversial show “Regarding Terror: The RAF-exhibition” on German left-wing terrorism there together with Klaus Biesenbach and Felix Ensslin as a last project.

Is there a difference in curating different field of arts, etc. paintings, videos, interactive works or a piece of net art?

My curatorial practice is based on my interests, not on artistic genres. I am intrigued by an artwork when it finds convincing, touching, surprising relations between form and content – whichever they are. Starting from this moment of exposure to my own affect towards one or several works, I enter a dialogue with the artist and in case of a solo project I work with him or her on a compelling conception and setup and a specific spatial translation of their work. If working on a thematic exhibition, I intend to conceive the essence of a piece and integrate it into the show’s argument properly.

What kind of qualities do you think a curator should have?

A curator should try to free him- or herself from conventions of looking and thinking time and again, get rid of resentments of how things supposedly are, and open one’s mind to push subjective and idiosyncratic perspectives on art and its presentation to a point where it translates for audiences, as well.

Do you think that new and digital media used in contemporary art has brought new aspects to arts and curating? Yes or no, explain why?

Each era produces its own mindset, awareness, aesthetics which determine what can be thought, done, and seen. Therefore, of course they change the forms and contents of art, as well of curating. But I don’t think this happens on the plane of the ‘end-product’, but they are the precondition for what we do. It is impossible to imagine what we would be able to do if our world had a different shape than it has. 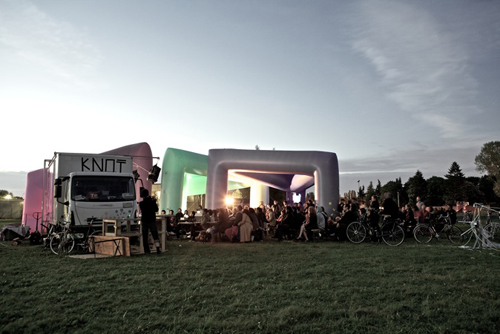 “Blow up my town” / The Knot. An evening with films about the individual’s relation to public, political, social, and economic space selected by Ellen Blumenstein (2010).

“Under deconstruction” by Ólafur Ólafsson and Libia Castro at the opening of the Pavilion of Iceland at the 54th International Art Exhibition, Venice (2011). Ellen Blumenstein curated the exhibition.

In times of “You Tube” and the Internet, do you think a curator is still needed?

Why wouldn’t s/he? In which way do you think they would replace the work of a curator? The internet is an intelligent, decentralized, collective and productive force, but curators create arguments and they work with and within spaces. I neither see how the virtual space could replace the physical confrontation with objects in space, nor how creating these spaces could be de-individualized.

What are your personal wishes, hopes and perspectives in curating? And what is the future of professional curating from your point of view?

I believe the museum and the academy will move together. The challenge for the next decade is to shape art institutions which defend the political, because freely accessible and negotiable space that the museum represents in Western societies and to offer a laboratory and home for the art community. They have to find appropriate formats to communicate the artistic propositions dealing with fundamental questions of the present to the broader public. Curators take their share in this responsibility.

“Bye bye utopia.” An event curated by Ellen Blumenstein whitch selected a series of films that deal in different ways with the construction of reality and its variability (2010).

Ellen Blumenstein (1976) is an independent curator, based in Berlin. She is a member of the curatorial collective The office, founded in 2009, with Katharina Fichtner, Maribel Lopez, Kathrin Meyer and runs the project SALON POPULAIRE, with Fiona Geuß and Ulrike Bernard. From 1998 to 2005 Blumenstein worked as a curator for KW – Institute for Contemporary Art and curated the exhibitions ‘Between Two Deaths’ at ZKM in Karlsruhe with Felix Ensslin in 2007 and the summer academy ‘Agulhas Negras – On the Necessity to Discuss Social Functions of Contemporary Art’ in São Paulo/Campos do Jordão in Brazil the year after.  She has been involved in several ground-breaking shows, such as The Human Stain at CGAC in Santiago de Compostela (Spain), 2009, and the Graduate Show at the Piet Zwart Institute in Rotterdam in 2011.

Photograph 1&2 belong to Ellen Blumenstein. The other photographs are taken from The office webpage and Google image